The lawyer-rating site Avvo.com is taking on a whole new profession with its launch today of doctor ratings. As of today, Avvo is adding an entirely new section of its site that contains profiles and ratings of medical doctors from all 50 states. 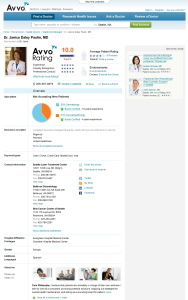 As it does with lawyers, Avvo is rating doctors on a scale of 1-to-10 and providing a variety of information about each doctor’s practice and disciplinary history. Avvo says it has profiles for virtually every doctor in the United States — some 800,000 — and has compiled ratings on 90 percent of those profiled. So far, it has disciplinary histories for about half the doctors and will continue to add more disciplinary information in the coming months.

The format of Avvo’s doctor section is virtually identical to that of its lawyer section. Just as they can ask lawyers legal questions, users can ask doctors medical questions. In place of a legal guide, it includes a health guide. Users are able to add their own reviews of doctors, just as they can for lawyers.

Avvo’s marketing director Conrad Saam tells me that he views the addition of doctors as a benefit to the lawyers who use the site. Not only should the doctor listings boost the site’s traffic overall, but also the site will use cross-promotion to drive users from one part to the other.

Remember that $10 million financing Avvo received earlier this year? At the time, CEO Mark Britton told me Avvo had various “game changing” initiatives in the works, but he declined to provide any details. Well, now we know at least one of them.

For other posts I’ve written about Avvo, follow this link.