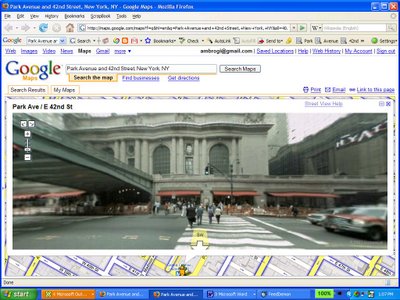 One of my favorite features of Amazon.com’s A9 search engine was its ability to display maps with block view images. Unlike the aerial views shown by other mapping sites, it took you to street level, linking map addresses to photographs of the actual streets and buildings in 22 major U.S. cities. Sadly, Amazon dropped this feature last year. (Windows Live has a limited beta version of something similar, letting you drive a virtual sports car or walk through areas of San Francisco and Tacoma, Wash.)

Now comes Google Maps to the rescue. It has added a similar feature, called Street View. The screen capture accompanying this post shows the Street View image of Grand Central Station in Manhattan. Blue outlines on maps show locations where it is available. Drag an icon to a point on the map, and the image pops up showing the street view of that address. You can rotate the image 360 degrees and click arrow buttons to move up or down a street. I have not found a listing of the cities it includes, but I can see from checking that it includes New York, San Francisco, Las Vegas and Miami.