The majority of federal judges believe that the lawyers who appear before them show an adequate level of knowledge and expertise in e-discovery matters, according to a recently published survey.

Even so, most judges say they have had to take affirmative action, such as issue a warning or require additional conferences, to get lawyers to address an e-discovery problem.

These are among the findings of Judges Survey 2019, an e-discovery survey of 264 sitting and retired federal judges. The survey was conducted by the e-discovery company Exterro and the EDRM program at Duke Law School’s Center for Judicial Studies.

This year’s findings as to attorney competence contrast with last year’s, when only 23 percent of judges agreed that “the typical attorney possesses the legal and technical subject matter knowledge required to effectively counsel clients on e-discovery matters.” 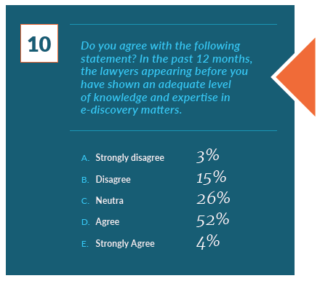 However, differences in the phrasing of the two years’ questions prevent the conclusion that there has been a giant leap in lawyers’ technical competence. While last year’s question specifically asked about both legal and technical knowledge, this year’s did not expressly ask about technological competence. Rather, the question was:

Do you agree with the following statement? In the past 12 months, the lawyers appearing before you have shown an adequate level of knowledge and expertise in e-discovery matters.

That could be interpreted to mean knowledge and expertise with respect to the law and rules of e-discovery, as opposed to the technology.

In answering that question this year, 52 percent of judges agreed that lawyers showed an adequate level of knowledge and expertise in e-discovery and 4 percent strongly agreed. Only 3 percent strongly disagreed and 15 percent disagreed.

Although the survey suggests that judges regularly take affirmative action to address an e-discovery problem, only 13 percent had sanctioned lawyers for e-discovery misconduct over the last 12 months. Judges said they would be most likely to sanction a lawyer for intentional misconduct that caused spoliation or for a failure to preserve potential evidence after the duty to preserve was triggered.