If you’re at all like me, your life is dispersed across multiple cloud platforms. I have documents on Drive, Dropbox and Box. I have notes in Evernote. I have photos on Instagram, Picasa and Flickr. Wouldn’t it be nice if you could access all these cloud services through a single interface and a single login?

Well, you can. In fact, there are a number of applications that let you do this. Some are paid and some are free. I have been trying two of the free services, Jolidrive and CloudKafe.

Both of these allow you to access a range of cloud applications through a single browser-based interface. Jolidrive also has apps that let you access it from an iPad or iPhone, but not from an Android device. CloudKafe has no mobile apps. 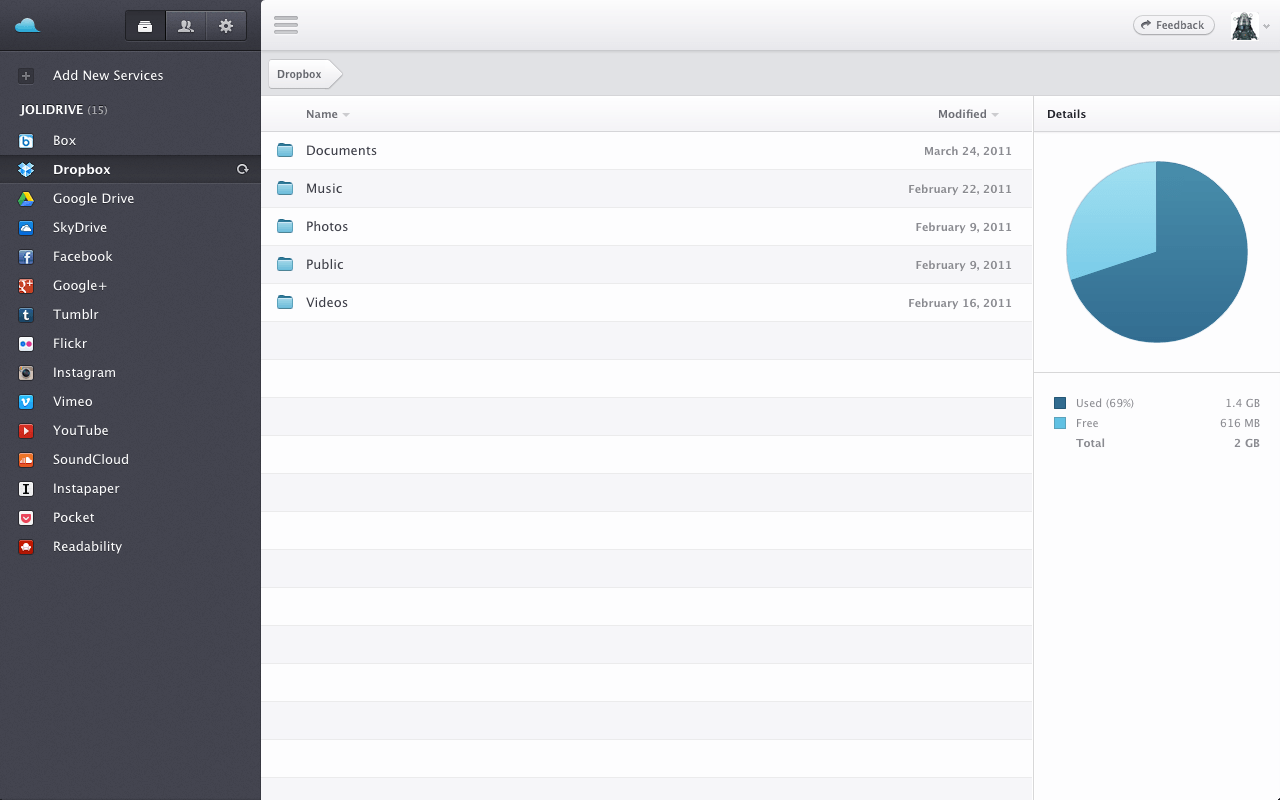 Dropbox files as they appear on Jolidrive.

In terms of the services they cover, Jolidrive has the edge. It integrates a range of document storage, photo, video and social media applications and even some music applications. You can listen to music and play videos from directly within the application. I count 28 services that it integrates: Google Drive, Google+, Picasa, YouTube, Feedly, Evernote, Dropbox, Box, Vimeo, Ubuntu One, Tumblr, SugarSync, SkyDrive, Readability, Put.io, Pocket, Flickr, Instagram, Instapaper, MediaFire, Facebook, Droplr, Dailymotion, CloudApp, Exfm, Scribd, SlideShare and SoundCloud.

As you add applications to Jolidrive, they are listed in the left-hand column. Simply click on any one to see the files you have there. Jolidrive lets you toggle between services and storage; click the home icon in the left panel to see your list of services, which might include Evernote, Feedly, YouTube or Google+. Click the drive icon and the list shows only your storage applications, such as Dropbox, Box and Google Drive. 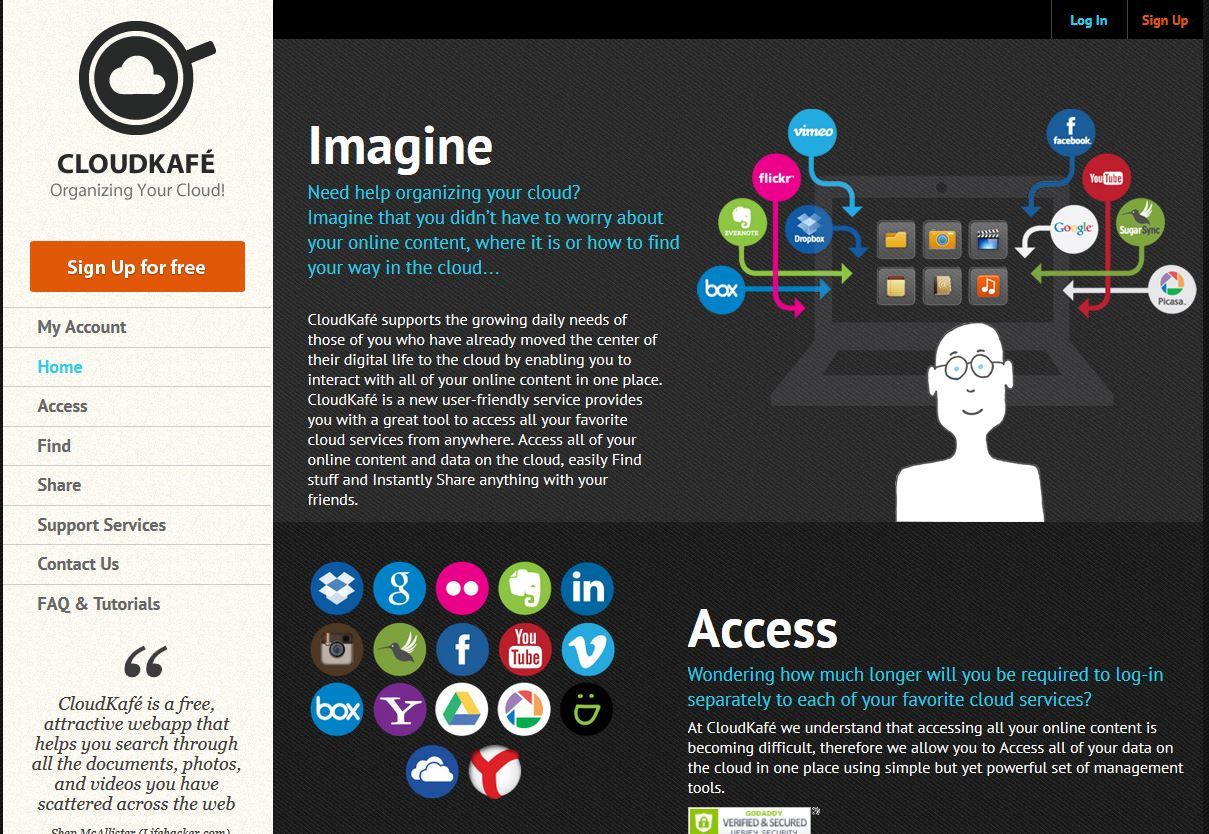 Only CloudKafe lets you search across services.

CloudKafe is similarly arranged. Icons across the top of the screen let you toggle among types of applications, from file storage to photos to video to notes and to contacts. (Unlike Jolidrive, CloudKafe lets you import contacts from Google, LinkedIn and Yahoo!.) As you click each icon type, the list of your included services appears in the left panel, much like with Jolidrive. Click on any of the listed services to see your files on that service. You can switch the view from a file list to thumbnails.

Applications that can be integrated into CloudKafe are: Google Drive, SugarSync, Dropbox, Box, SkyDrive, Yandex, Facebook (for pictures and videos only), SmugMug, Picasa, Flickr, Instagram, YouTube, Vimeo, Evernote and Springpad. As already noted, you can also integrate contacts from Google , Yahoo! and LinkedIn.

So far in my descriptions of these two services, they have sounded pretty much alike. But in terms of the functionality they offer, CloudKafe has two notable advantages over Jolidrive.

One advantage is search. If you’re going to have a single interface to all your cloud applications, wouldn’t it be great to be able to search across all of them? Unfortunately, Jolidrive does not allow this; you can search only within an individual application. So if you want to find a document, you would have to search Box and then search Google Drive and then search Dropbox. Same for pictures or any other files.

By contrast, CloudKafe provides the ability to search across applications. Enter a search and it aggregates matches from across your cloud in a single window, with results arranged by categories — e.g., documents, notes, videos, etc.

However, the search is only of file and folder names, not full text. So if the word you search is not somewhere in the name, the file will not be included in your search results.

Also, in my testing, CloudKafe would not search Box files at all, not even by file name. I  have tried to contact someone at CloudKafe to ask about this, but so far have received no response.

The second advantage of CloudKafe is the ability to move files across applications. Within CloudKafe, you can move or copy a file from Dropbox to Google Drive, for example. Jolidrive does not allow files to be moved between applications.

Neither of these services actually stores any of your content. You can remove services or delete your account entirely, without it affecting any of your files on the linked application.

If your files are spread across multiple clouds, you may find one of these services useful. Neither has the full range of functionality I’d like to see in such a service, but both bring a degree of organization to scattered clouds.